Malpartida is situated in the pseudoesteparia area on the outskirts of Cáceres, an environment dominated by the plain guarding important species threatened the sison, the great bustard and the lesser Kestrel.

The blooms of the granitic batholith which Malpartida sits the flat landscape provides a number of 'Islands' where the fauna and flora are a shelter that allows their presence in the space. This phenomenon is enhanced with the existence of ponds and wells that take advantage of the qualities of the granitic soils to store water, which counteracts the periods of summer drought and allows an explosion of natural life that cannot but impress us.

The largest, and most surprising, these 'islas-refugio' it is the Natural Monument of Los Barruecos, which presents a spectacular landscape dominated by large granite bowling, sculpted by erosive agents for thousands of years. The whimsical shapes resulting present the most extensive catalogue of modeling on granite, which has attracted the attention of geologists and geomorphologists from around the world.

The landscape is completed with the presence of four historical reservoirs, in whose waters reflected shapes granite creating the feeling of an illusory landscape.

The conjunction of the shelter provided by the rocks and the abundance of water throughout the year are also an excellent claim to the fauna and flora. Next to the bushes as the codesos (Adenocarpus complicatus) and white broom (Citisus multiflorus) are loose foot of Oaks (Quercus rotundifolia), cork oaks (Quercus suber), piruetanos (Pirus bourguaeana) grow (Celtis australis) olives (Olea europea) or Willow (Salix alba) grouped these in the abundant wetlands.

The fauna is varied, finding copies of birds of prey that move to Los Barruecos, attracted by the abundance of food and water: can enjoy reigning on the sky of the landscape of the silhouettes of the short-toed eagle (Circaetus gallinatus), the booted Eagle (Hieraetus pennatus) kite (Milvus milvus)... 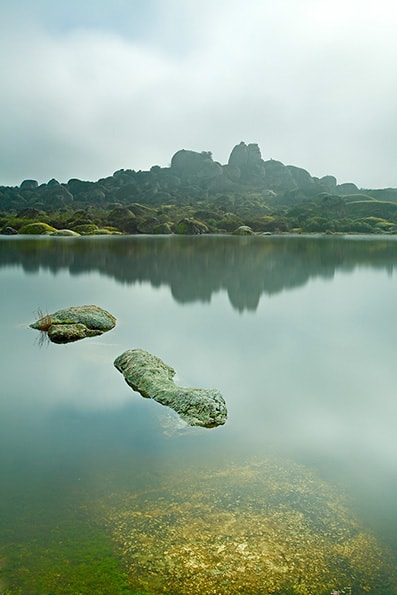 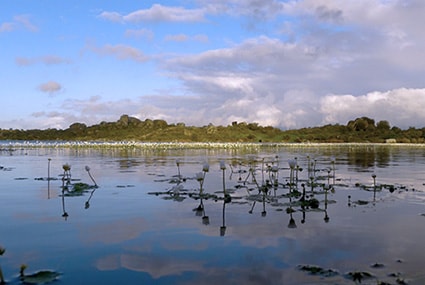 Its peculiarities is especially significant in the Natural Monument of Los Barruecos the White Stork (Ciconia ciconia) and the tench (Tinca tinca), the latter as a species which repopulated the ponds for the practice of sport fishing between May and September, which is deeply rooted in the population. In the white stork colony it has such importance that has been considered the biggest in Europe in its natural state, nesting on the large granite bowling. The peculiarity of the colony of Los Barruecos, coupled with the extensive colony urban seated in the population and the efforts of the City Council for the conservation of this bird and its habitat, earned Malpartida de Cáceres the appointment of European Stork village in 1997, by the European Natural Heritage Fund (EURONATUR).

We can not ignore Los Barruecos is an anthropic landscape, where human activity has been decisive since prehistoric times. Witness to this are the abundant archaeological sites that test taking advantage of the magnificent conditions of the place already in the Paleolithic. Of the CHALCOLITHIC date walled settlements and the set of engravings and schematic paintings during the Roman era is constructed a magnificent villa - associated with nearby and the colonia Norba Caesarina - anthropomorphic tombs sets.

Four reservoirs that give a special light to the landscape are built in modern and contemporary age: Barrueco from above and grinder (s. XVI), Barrueco down to give service to the wool laundry (s. XVIII) and bottle ten pond (s. 19th). All of them are associated with mills and orchards, forming a sound example of the use of water.

The architectural complex of Los Barruecos wool laundry, named historic landmark site-Cultural asset by the Junta de Extremadura, operated since the end of the 18th century until the first decade of the 20th century.

After serving as a livestock farm, in 1976 it was acquired by the City Council of Cáceres Malpartida which, together with the Junta de Extremadura, turned it into the Museo Vostell Malpartida of contemporary art.

The last uses given in Los Barruecos are directly related to environmental activities: since it was named Natural Monument in 1996, the Junta de Extremadura endowed it with three buildings: the center of interpretation of the Natural Monument, Center of interpretation of water - the mill - and the visitors center where a room dedicated to the presence of the white stork in Malpartida is exposed.